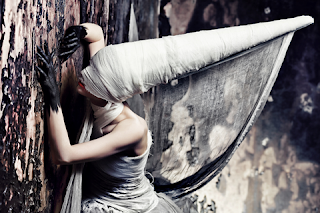 Through a crack in the curtain I see
a white-robed figure in the street,
standing listless
next to my neighbour's house.

They gaze off, away from here;
you almost feel they don't see
the nearby door,
don't have a hand on the post,
don't lean towards the place
where people live.

And looking again, hoping not to be seen,
steeling my face in case I meet their eyes,
I see the figure is gone.
There is no white shape,
or long leg turned in a moment's pause.
An empty street and no light
is left where they stood.

Staring at the place
I let the curtain fall:
this one veil is solid and real,
the other is stretched and torn.

There is no such thing as time 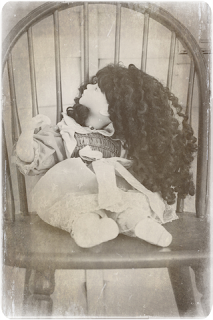 when it comes to creativity.

I have just re-started writing a children's book, a nice little ghost story full of creepy stuff and a few laughs too. I love this book, it has an enduring appeal to me and I often think of it. I just didn't realise how long it had been since I worked on it.

Looking for the latest draft on the laptop I could only find one from April 2015. That couldn't be right! Of course it was. Despite me feeling like I know this book inside out and often think of ideas yet to be written for it, it had been over a year since I actually wrote anything new.

Guilt set in and I quickly scanned ahead to the final couple of chapters. Reading them it felt like only the other month, yet somehow I'd lost over a year!

The boys facing the ghost, the little sister who is haunted by her, the old doll, the wax, the broken-down shed and the pitiless, wrapping thorns: there they all are, as if I turned away and looked back soon after.

Exasperated I started to work, then realised it really was as if I had only just turned away. It was all there, all remembered, and I was ready for the next chapter.

Some books write themselves and others are already written in the imagination: I think this is the latter. It waits for me to type it up, even as the story unfolds in my mind. To me what is a surprise is done and dusted somewhere and I have already thought of the last word.

It is like being two people at once, the reader and the writer. The writer side of me keeps her secrets very close - it is left to the reader to expose the story, line by line, hoping that this will happen and that the other will not.

Perhaps the real secret to finishing these books is not to feel exasperated and force myself to work. Instead I need to decide today I will read The Ghost Nanny, reading it as I write, so that each new part of the story is enjoyed like I was someone else.

In fact, doing what I always used to do, writing something because it fills me with excitement and anticipation.

So I will read the Ghost Nanny and hope it all turns out well, even though somewhere the dark figure at the window has already faded and her touch is only a memory to the little girl with the raggedy doll. 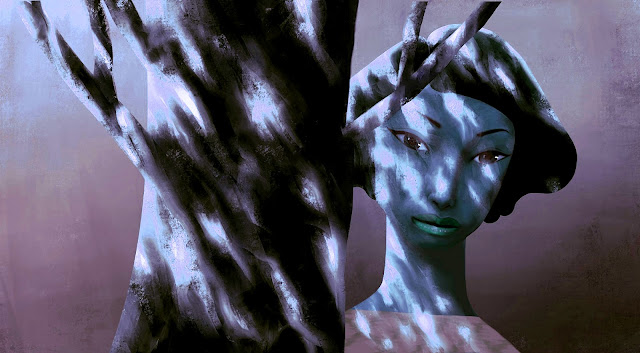